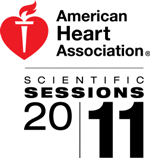 At the American Heart Association Scientific Sessions 2011, Dr. John Mandrola presented a poster on gender-specific results of atrial fibrillation ablation in a private practice setting. In this video interview with him about the poster, he mentioned that in his experience women appear to be more challenging to treat with atrial fibrillation ablation and do not appear to fare as well as men from it. In addition, it appeared that women were referred more often for AV node ablations than men.

Watch the video at:

Atrial Fibrillation Ablation Results Differ Between Men and Women According to Results from Dr. John Mandrola