Catheter ablation is an atrial fibrillation treatment that is done by a specialized cardiologist, called an electrophysiologist (EP). Electrophysiologists focus on the heart’s electrical system and deal with afib and other irregular heartbeats (arrhythmias).

It is done on a beating heart in a closed chest procedure. Small punctures are made in the groin, arm, or neck area, and thin, flexible tubes, called catheters, are inserted and threaded to the heart. Once there, the catheter’s tip is threaded through a tiny incision in the septal wall between the left and right atria. It is positioned to ablate tissue around the pulmonary veins or at other sources of erratic electrical signals that cause the irregular heartbeat.

The catheter uses an energy source, such as radiofrequency energy (radio waves), cryothermy (intense cold), laser energy (light waves), or ultrasound energy to create a lesion of scar tissue, called a conduction block, that stops the erratic electrical signals from traveling through the heart. 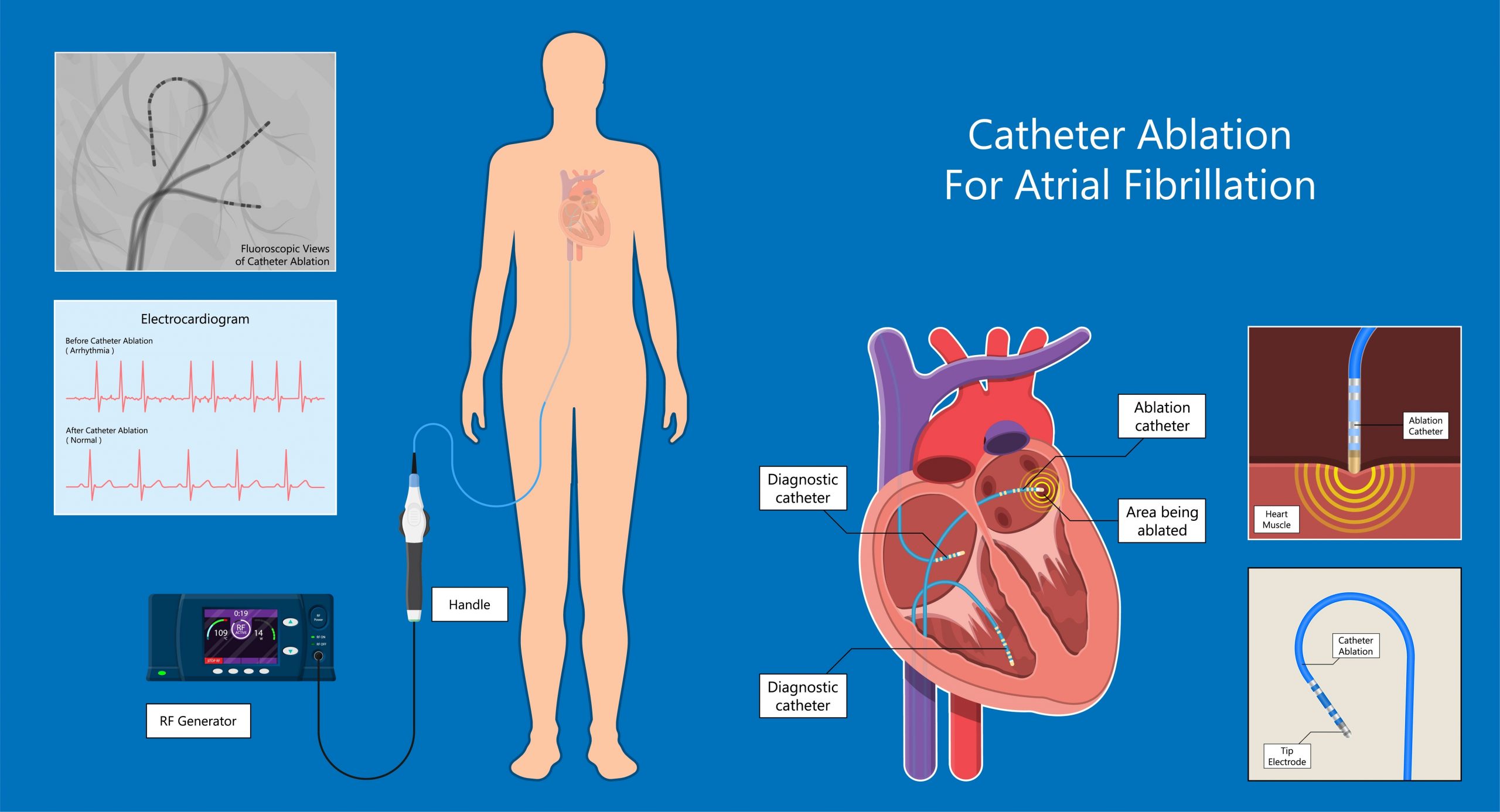 Catheter ablation originated in the 1980s for treating cardiac arrhythmias and started being used for atrial fibrillation ablation in the 1990s. Variations of the procedure have evolved over time.

One of the newest frontiers in afib treatment has evolved from a collaboration between electrophysiologists and cardiothoracic surgeons, especially at integrated afib centers. Since both catheter ablation and the mini maze procedure have advantages, a hybrid ablation combines the best of both of them. To learn more about these hybrid procedures, see Hybrid Ablation Procedures.

One afib ablation procedure that has been done for years, but is less commonly done today, is AV node ablation. It is sometimes called AV junctional ablation or “ablate and pace.” The atrioventricular (AV) node sends electrical signals from the upper to the lower chambers of the heart. In this procedure, a permanent pacemaker is implanted to help control the heart’s electrical system. Once the pacemaker is in place, the AV node is frozen or cauterized to prevent electrical signals from being transmitted. The heart is then reliant on the pacemaker.

This procedure doesn’t stop heart palpitations. Thus, the patient may keep having afib. However, the afib signals don’t get transmitted to the rest of the heart. As a result, some patients no longer feel irregular heartbeats, but some still do.

Since the afib continues, the patient must stay on an anticoagulant medication, such as Coumadin (warfarin) or a direct oral anticoagulant (DOAC), to prevent strokes. If atrial fibrillation continues, fibrosis (scar tissue) continues to build. Increased fibrosis is correlated with an increased risk for stroke. In addition, the heart may not work as effectively, so patients may still feel tired. This may work best in patients who already have a pacemaker or need one for other reasons.

You Don't Have to Go It Alone

StopAfib.org was created for patients by patients to provide accurate information and genuine support for those affected by atrial fibrillation. Explore our online community and connect with other patients, families, and caregivers.

URGENT: Please Ask Congress to Tell Medicare to Preserve Your Ability to Get an Ablation

Recently, we asked afib patients in the US to ask Medicare to preserve their ability to get a catheter ablation when needed. Unfortunately, that comment period closed in early September, but we have another opportunity… Read On

Join us for a Restoring Life’s Rhythm Webinar, Hosted by Medtronic

URGENT HELP NEEDED: Ask Medicare to Preserve Your Ability to Get a Catheter Ablation

Medicare’s Proposed 40% Payment Cuts for Electrophysiologists Will Make Afib Catheter Ablations Hard to Get If you are an afib patient on Medicare (in the US and 65 or more), this is scary as afib… Read On