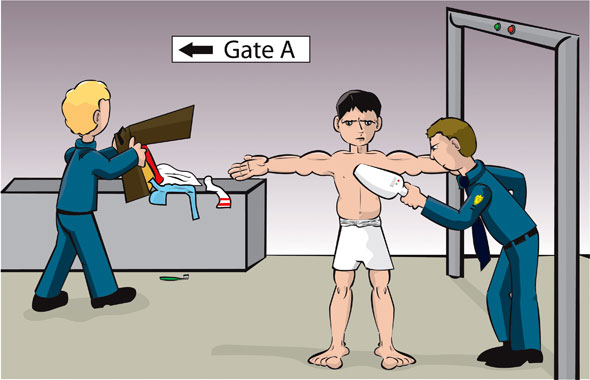 I just got home from a one-week multi-city trip and have so much catching up to do. But with the furor over the new airport security screening procedures that have just gone into effect in the US, I have some thoughts that I simply must share before my head explodes. This is truly a lose-lose situation as neither of the two new options is reasonable or acceptable, at least not for those of us who have, or have had, atrial fibrillation.

Are They Taking the Easy Way Out Because of the Uproar from Men?

I didn’t experience any differences from the usual screening procedures at DFW Airport in Dallas when I left last week because I didn’t go out of Terminal D, the only terminal that currently has the full-body scanners. But when I went through O’Hare Airport in Chicago enroute to Atlanta this week, I noticed something odd—the only people being subjected to the full-body scanners, at least at the checkpoint I went through, were women.

In light of the recent uproar from men, such as the “don’t touch my junk guy“, is TSA going after easier targets? Do they consider women to be more compliant and less likely to object to the full-body scans? Or do they think that if women opt out, we are less likely to complain because for years we have been accepting some pretty invasive secondary screening? At least it seemed invasive to me. In fact, for years I’ve used my airport security story, “The Federally-Mandated Groping”, in speeches about stress and heart disease since the stress of being a road warrior contributed to my own heart disease. Now, with these invasive new “groping protocols”, I have lots more new material.

So how many women terrorists have we seen in the US? Does more intensive screening just for women make any sense at all?

And now there is word that Muslim women won’t be subjected to pat-downs below the head and neck, for religious reasons. So what about those of us brought up in religious households where modesty was a virtue? These new screenings amount to nothing short of molestation. Parents, please don’t let your daughters be subjected to this abuse from strangers. Is it time for the rest of us to stand up and proclaim exemption for religious reasons as well?

What About Our Safety From Radiation?

Aside from the privacy issues of these full-body scanners, there is the radiation problem as well. Atrial fibrillation patients who have undergone afib procedures have generally already been exposed to some radiation from tests performed before these procedures and from fluoroscopy during catheter ablations. And if we have underlying heart disease—about 80% of afib patients do—then we’re likely to have received radiation from other procedures and tests as well. Radiation exposure is cumulative over a lifetime. Do we really need even more radiation?

When these full-body scanners came out, I found little information on them, presumably for security reasons. We still don’t know much more, and know virtually nothing about the health effects. The wavelengths—at least for the millimeter wave machines—are short, and similar to microwaves. If I won’t even stand near a microwave oven while it’s running due to the potential for leaks, why would I subject myself to being directly bombarded with similar waves several times per week? The shorter wavelength means a higher energy density, so the effect appears multiplicative, which is why newer cell phones are considered more concerning, too.

Do we really know how well controlled these transmissions are, and whether the machines are calibrated frequently? If they can’t even maintain proper calibration on the simple machines that process the swab tests for explosives, what makes us think that they can keep these very complex new machines calibrated correctly?

I just can’t believe that we are being asked to subject children to something with untested health effects. Due to their small physical size, they get many times the exposure of adults. And what about doing this to women of child-bearing age, or even worse, to pregnant women? What are we thinking? And it appears that as we get older, our bodies become more susceptible to these ill effects as well.

According to Scientists Concerned About Safety of New Airport X-Ray Scanners:

David Brenner, who heads Columbia University’s Center for Radiological Research, doesn’t think that the small dose of radiation from the scanners poses much of a risk to most individuals, but the scale of the operation—and the fact it will include a small percentage of the population who may be unwittingly sensitive to radiation—is problematic. Recent research, Brenner says, indicates that about 5 percent of the population – one person in 20 – is especially sensitive to radiation. These people have gene mutations that make them less able to repair X-ray damage to their DNA. Two examples are the BRCA-1 and BRCA-2 mutations associated with breast and ovarian cancer, but scientists believe many more such defects are unknown.

And from Biochemist says ‘naked’ X-ray scanner may be unsafe:

Air travelers over 65 years old are especially susceptible to the “mutagenic effects of the X-rays,” they say, as are HIV and cancer patients, children and adolescents, pregnant women, and men (because the X-rays can penetrate skin and put the testicles “at risk for sperm mutagenesis”). Eyes could also be at risk because X-rays can penetrate the cornea.

So are afib patients among the five per cent who are “radiation sensitive”? We could be. Since afib is an electrical condition of the heart, and there also appears to be a genetic component to afib for some people, it’s certainly possible. I personally will not do anything that could invite the return of the “afib beast.”

Having spent a bunch of money and time having an atrial fibrillation procedure to cure my afib, and having been afib-free for over 5 years, I am unwilling to subject myself to any machine that might have the potential to impact my heart’s electrical system. We have no proof as to whether it’s safe or not, but why take the risk?

Therefore, when I have encountered these scanners, I have opted out for medical reasons and have just resigned myself to an invasive pat down. But that was before they started going places where they should be arrested for going. I believe that nobody, not even our government, has a right to violate us.

Why should I put myself through a humiliating, demeaning, and invasive search such as this? I have to seriously reconsider whether it’s worth being violated to go out and save lives.

Why can’t we go back to a Registered Traveler kind of program for those of us that fly a lot, or even opt to submit more info and get a background check when we get our US passports? Let’s be practical about this whole thing and look at behaviors for clues. (No, behaviors and profiling are not the same thing.) If you will talk with me for a moment, you’ll know that I’m not a likely terrorist.

As someone who travels the US and internationally to save lives from heart disease and stroke, and who is old enough to be a grandma, am I a likely candidate to blow up a plane? I don’t think so. Is the continuous positive airway pressure (CPAP) machine that I carry for treating my sleep apnea, and which they test ever so thoroughly, likely to carry explosives? I don’t think so. Come on TSA, get a clue!

Is It Really Necessary to Threaten Us?

Most TSA agents are respectful and just trying to do their jobs—I appreciate what they have to go through. But occasionally you run across a few who are obsessed with their power and are downright rude. That was the case a few months ago at DFW, my home airport. (They used to be courteous here–what happened?) When the machine testing my CPAP for explosives didn’t produce a green light, I respectfully asked if they could re-test it on the other machine. That didn’t seem out of line as that is exactly what they had done (on their own) on the same machine at the same gate a few days earlier. They had suspected that the original machine was out of calibration, and it apparently was.

Oddly, my CPAP had not been touched since it had passed at Reagan Airport in DC a couple of days earlier, so I couldn’t see any way that it could have been contaminated. Surely this machine must have been out of calibration. But they said that they couldn’t retest it. I politely asked if the machine could be out of calibration and mentioned what had happened with the same machine a few days earlier, and that my CPAP passed with flying colors on the other machine. That’s when they told me to shut up, and if I said one more word I would be arrested.

I stood there cringing (and so angry that I was almost in tears) as they ran their germy hands through all my stuff. As somewhat of a germaphobe—inflammation is a very serious issue for me as a heart patient—I almost came unglued as I had to silently watch them put their germy hands all over my medications. Wouldn’t you have, too? Let’s use some common sense, TSA.

This blatant lack of common sense and judgment when it comes to screening has forced me to re-evaluate whether I’ll continue to travel, or not. I have a couple of weeks at home before I leave again, but I have to really do some soul searching. And I haven’t bought my tickets yet.

It will be sad if I can no longer travel to help the afib community and to save lives from strokes and heart disease because TSA is putting my health in jeopardy with two very invasive and stressful options. But I have to walk my talk—my health has to come first.

If I truly thought that we were safer because of what they are doing, it might be different. But this is just a show to make us think we are safer—we really aren’t. It’s a real travesty.

They are putting your life, as an afib patient, in jeopardy as well. This kind of abuse should be illegal, and probably is. It’s time for some of the best minds in this country to figure out a solution before we shut down our whole economy because people refuse to fly. It’s not like our economy is healthy enough to sustain that.

So what about the concerns of the afib community? I personally think that those with afib, and probably anyone with an arrhythmia, should opt out of the “body-snatcher machines” until we know they are safe for those with electrical problems of the heart. And the new pat-downs are so invasive that the stress from them could be enough to send you into afib, at least if you have adrenergic, or stress-related, atrial fibrillation.